Bees in the cemetery update 30 June11

On Sunday when we checked the bees we found a minor engineering problem in our second hive. The first (swarm) hive has settled in well and nearly covered all the frames with a text book combination of food and brood. However, the second hive of reared black bees came on standard sized National foundation frames. This means that when we put them in our deep brood boxes there was some space underneath. Naturally the bees have gone ahead and filled this space with comb – and of course they haven’t done it in neat rows. They did it randomly instead. It's very pretty to look at, but it creates something of a problem when we want to move the frames around. Looking at it we decided to try and plant some of the extra comb from the bottom onto an empty frame. Since it’s full of brood we really don’t want to waste all that effort from the colony.

Yesterday we went back in the evening light with the sun rays cutting straight through the trees onto the hive. Stephane’s flat mate came and helped with the smoker and we lifted the whole brood box up so we could pull the extra comb out from underneath. Surprisingly the bees didn’t seem to mind at all and we collected four of the extra bits of comb and threw away three or four small other pieces. Then we did our best to plant the ones we were keeping onto the support wires of an empty frame. It looked pretty precarious when we put it back in the hive, but with luck the bees will stick it all together with new wax. With the space under the shorter frames now cleared of obstruction we were able to alternate deep and standard frames. Hopefully this leaves the bees a narrow channel to encourage them to build new comb in a way that’s compatible with lifting the frames in and out. It’s for our benefit, not theirs, so we can manage the hive more easily, and we’ll just have to wait and see whether they cooperate. What we could already see was that they haven’t filled the deeper frames they’ve got with either brood or honey, which means they’ve not come on as much as the swarm hive. We spotted a fair number of queen cells in the swarm hive and broke them open to avoid getting another queen, but Stephane suggested we leave one. I think he’s wondering if we might re-Queen the black bees hive with it in the hope of re-invigorating them

Looking at the base board we could see some varoa were visible, but not a worrying amount. The good news is that the swarm hive is ready to have a super* go on top as they’ve pretty much filled the frames that are already in there. The recent sunshine, following on the heels of all that rain, may result in an explosion of blooms, both flowers and trees. If it does then we want to have space ready for the bees to pack their honey in, so we’re going to put one on this Sunday.

When I got home with one of the bits of discarded comb I picked the sealed brood open with a pin and showed my son. Some cells were full of what looked like white puss (larvae) while others had developed enough to be in bee form, but completely milky white. Others had developed even more and were darkening around the head and abdomen. Some even hatched while we were watching, crawling to the cells that had traces of honey and pollen and apparently feeding themselves immediately. Completely fascinating.

* A super, for those who were wondering, is one of the boxes that go above the brood chamber. The brood chamber will contain food cells and cells for breeding bees. Putting a gate between the brood box and the supers above it – like a sieve that lets worker bees through, but not the queen – guarantees that no larvae get laid in the upper boxes. This leaves the upper boxes as a honey only zone. Essentially, this is the innovation of modern bee keeping: the creation of a area from which the honey can be easily extracted by the bee keeper, without damaging the bees that are growing in the brood cells.

Here's some pictures of the hives (more pics here http://ttkensaltokilburn.ning.com/photo/albums/bee-hives-june-11) 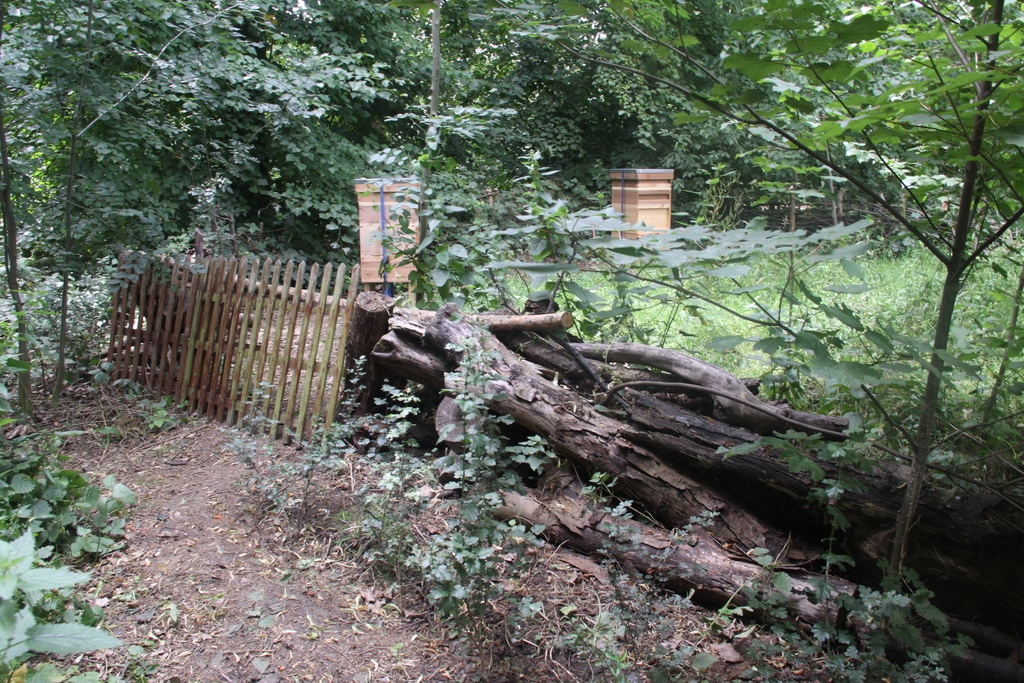