– Mahmoud Darwish We Journey Towards Home[i]

Is somewhere on the other side of a wide, wide river  -

Spades cut rhythmically into the soil, collect their quota of crumbling earth, sweep horizontally through the air and tip their charge into the raised beds. It’s a bright spring Saturday at Queens Park allotment when a group of us perform this industrious dance: dig, sweep, tip, dig, sweep, tip. Jackets accumulate on the fence as the sun emerges. It’s hard work but we talk and laugh through it, suffused with purposefulness. One of the bags of soil must have been stored beneath a blossoming tree as crisp white petals polka dot the earthy browns. The petals scatter and drift as the soil drops heavily down. Intermittently we all have reason to pause, spades shoved unceremoniously into the soil, we stand breathing hard and watch Mick Guerin, the park attendant, come blazing in, manoeuvring the park’s cumbersome tractor through a narrow gap in the fence to deliver yet another enormous sack of loam. 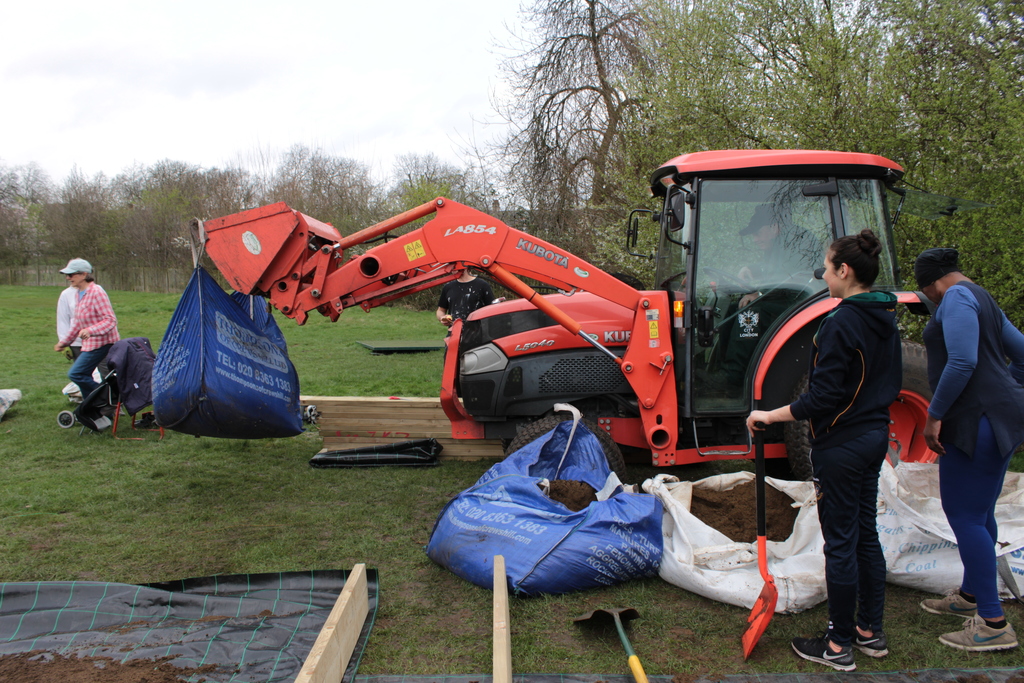 A man walks past the allotment and stops to watch our progress. He calls out to Maggie, obviously the one in charge, and asks: “Is this just an allotment extension or is there a bigger story?” Maggie smiles and responds, “There’s a much bigger story.”

And the story starts with a story. A story told through a BBC documentary about refugees, “Exodus: Our Journey to Europe”, screened last July on BBC 2. Described as a “terrifying, intimate, epic portrait of the migration crisis”[iii] this intense piece of journalism had a deep impact on Maggie Turp, the person who currently coordinates the Queens Park Allotment. Already aware of and moved by the refugee crisis, the experiences portrayed within the BBC documentary compelled Maggie to get up and do something. She started talking to the people at Salusbury World, a local refugee charity, as well as the Queens Park managers. Soon she had devised a plan to extend the existing allotment to include seven new raised beds solely for the use of refugees. Here refugees referred through Salusbury World will have the opportunity to grow food produce, share skills and knowledge, and work alongside fellow refugees as well as the current allotment holders. Maggie also plans to have a system in place where either someone who already works on the allotment, or a keen gardener on the waiting list, can buddy up with a refugee to help them feel welcomed into the space. 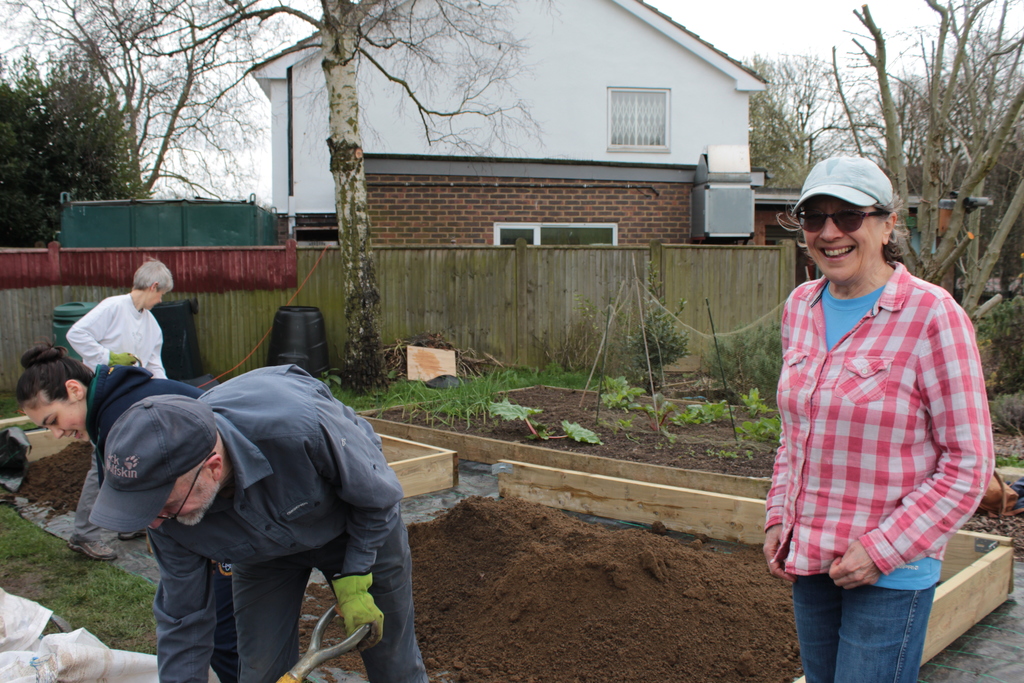 Maggie, a writer herself, is intrigued by the power of stories and holds high hopes that the new allotments will provide a platform for sharing histories and experiences. She says, “It’s about stories inspiring action and action bringing more stories to light. And then stories inspiring action again.” Maggie goes on to explain that there is something about working ‘alongside’ someone that allows the person to open up, to talk and share, in a way that would be much harder under different circumstances.

This is evident already at this founding stage of the project. As we, a group of volunteers, many of whom haven’t met before, work together to create the new garden beds, stories begin to emerge and connections are made.  With exclamations of amazement I discover that one of the other volunteers and I were born in the same hospital in the same town in Australia all those thousands of miles away. Other volunteers share recipes for the food produce grown on their plots while a volunteer with a mini home brewery connects with an allotment holder who’s been growing hops. Already the project has enabled human connections to come to light and inspired further collaborative projects.

Maggie has been overwhelmed by the positive response to the project. She applied for and received funding from Transition Town Kensal to Kilburn to purchase the wood, brackets and other sundries including a starter pack of gloves, fork and trowel for each refugee. The Queens Park managers have provided enormous support including supplying the soil, weed suppressant matting and bark chips for the paths. Miko,an ex-plot holder and sometime jobbing builder, volunteered to be onsite to build the beds while a large number of volunteers have turned up to help out. The plan is to recruit seven people for the new garden beds by April 22nd, the day of the “Big Dig” event. If the project is a success Maggie hopes that it can be a model for community allotments all across the country. The thwoosh and thud of soil being transported from one site to the next continues across the day. Miko saws and drills, machinery buzzing, as he creates the wooden frames. He works around us, the mounds of earth building within the centre of the open ended beds. With the final screws in place we spread and flatten the earth towards the four corners, stretching the blank canvas of soil across the frames.

As we work, Miko’s daughter sits and idly draws on a wooden block. When she’s done she presents us with her artwork: a garden, lush with growth, birds and insects flying around and the word “Green” written across the top. A beautiful prophetic vision revealing the latent potential of this new allotment space. As we wind up the work I reflect on my own experience of living far away from my home. I moved to London five years ago and I’m often asked if I miss Australia. Apart from missing my family and friends I miss the nature of my home: the scent of eucalyptus, cycadas grating noisily under a beating sun and the reds and yellows of the soil. Gardening here in London has helped me connect with this place as my new home, the woody smell of the soil and vibrant greens becoming part of the fabric of my sense of belonging here. I moved here by choice. There were no horrors to drive me away and I can return to Australia if I choose. I sincerely hope that the refugees who come to garden at Queens Park Allotment will also gain some sense of belonging, will find some solace in the people and nature of their new home. 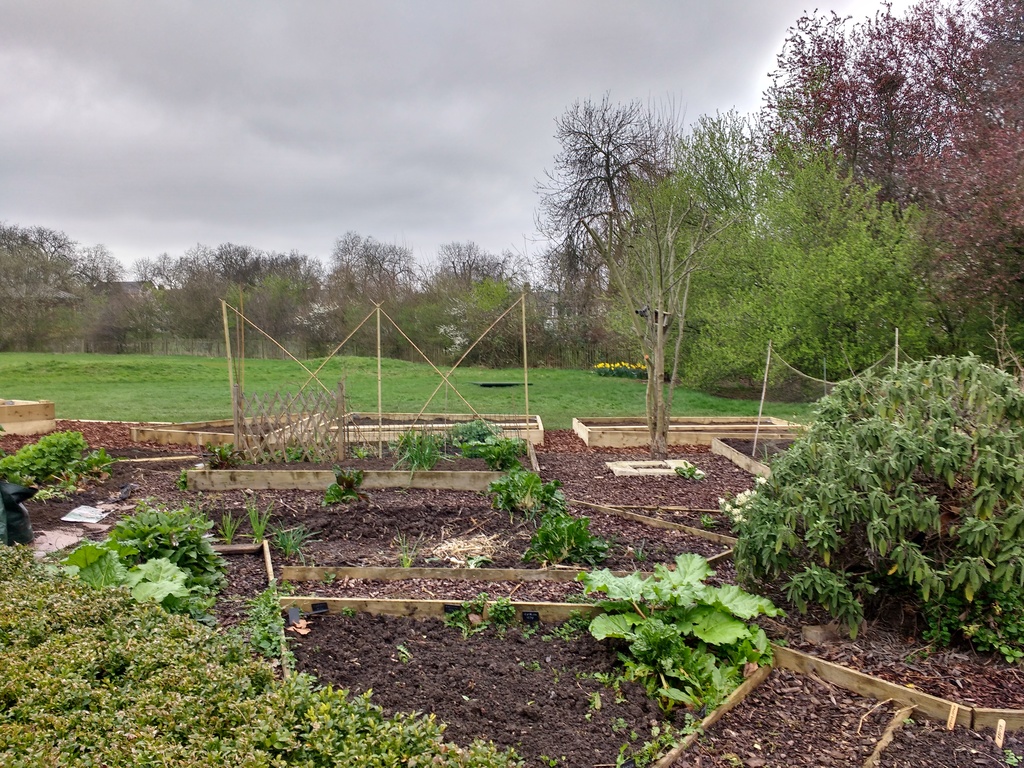 [iii] http://www.bbc.co.uk/programmes/b07ky6ft  Go to this link to view “Exodus: Our Journey to Europe”

Thanks Ursula, I'm glad you enjoyed it!