Following on from my last post (hopefully not the Last Post!), finally met with the decision makers at Preston Manor School, Wembley: Head, Chair of Governors, Business and Site managers. I presented our offer (Saving on electricity of around £2700 a year, no cost to school, 5% to investors) and got some awkward questions in return.  What if a child were to climb on the solar roof and get injured? What if a hurricane were to blow a panel off and damage people or property? (answer: our…

Just wanted to let you all know that there is an Energy Coop functioning in Brent!

A group of us from TTKTK and Brent FOE started meeting about 18 months ago responding to FOE's campaign to get local schools to 'Run on Sun'.  (i.e install Solar PV panels) We looked at the various ways of raising funds, ranging from local council money (no chance with the cut-backs) through donations (as e.g. organised by 10:10) to forming a Coop, which we have done. I attended a meeting…

BBC London Radio programme about Kilburn online till about mid-Feb

An Introduction to Harlesden Town Gardens

The Harlesden Town Garden project was started in March 2013. The main aim was…

Brent Mind is recruiting volunteers for an exciting new peer mentoring service for young people with mild to moderate mental health issues.  Volunteers will be required to meet with their mentee for up to two hours each week to focus on working together to support recovery and build resilience.  If you are interested in volunteering for the service or accessing, please contact Rochelle Batten on rochelle.batten@brentmind.org.uk

Sometimes knowing that you can cook something without too much hassle is not enough for you to try it, even when you are quite curious to try new plant-based food. I’ve been meaning for quite a few weeks now to cook with nettles, for example. But, without the intervention of Kensal to Kiburn harvesters, I would still look at the urtica diodica specimen in my garden with suspicion.

As I had signed up to the workshop organized by Michael Stuart from Transition Kensal to Kilburn,…

The Suffra Food bank at St Raphael's estate (next to Ikea) is trying to set up a food growing project on the estate.  They have a site.  The food bank (and the project) are both worth supporting.

Please vote on-line to support the project, so that they can access an Aviva community fund.…

I work for a charity called Beanstalk (formerly ‘Volunteer Reading Help’) which tackles the problem of childhood illiteracy by facilitating community volunteering in local primary schools. You…

I was fortunate enough to go and hear Naomi Klein talking on her new book This Changes Everything on Monday night.  (Me and 1999 others!)  She spoke very positively about the Transition Town movement and what we do on a local level.

Another point she made well was the need at this time for peer education groups on climate change and on our responses to the crisis.  This resonated with me - feeling the need to be more specifically informed and the need to join with others to…

Some pics from the Film Night on Charteris Street.  Despite the fears of a rain soaked evening, the rain managed to stay away all evening. Thanks to all that came and joined us! 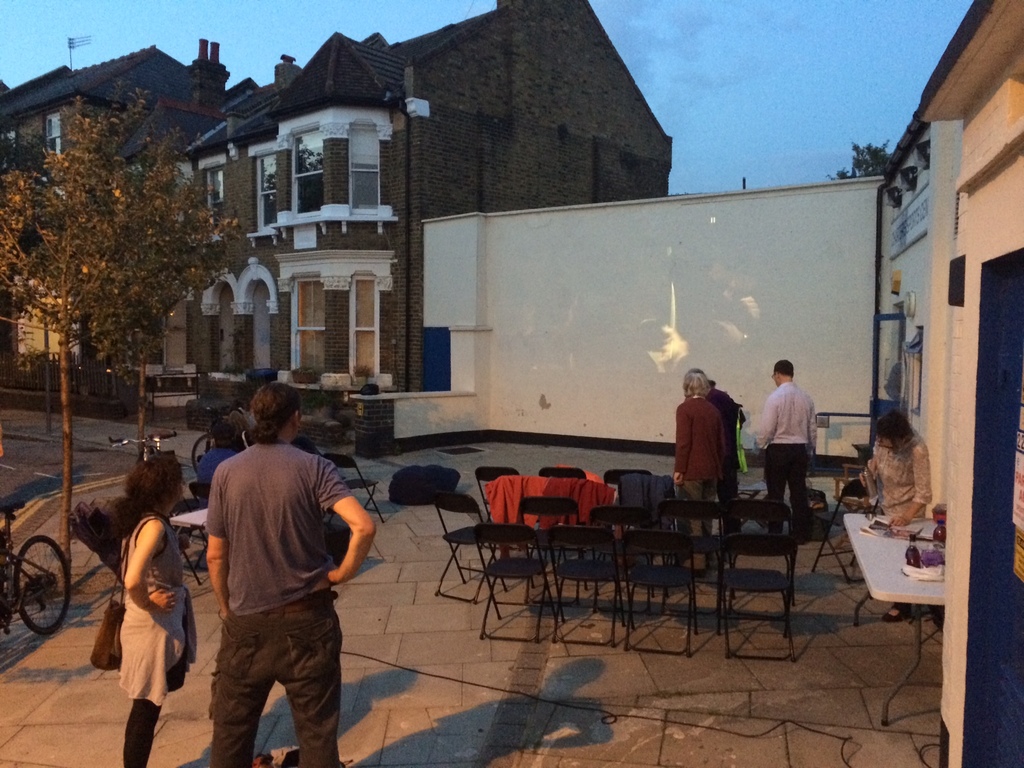 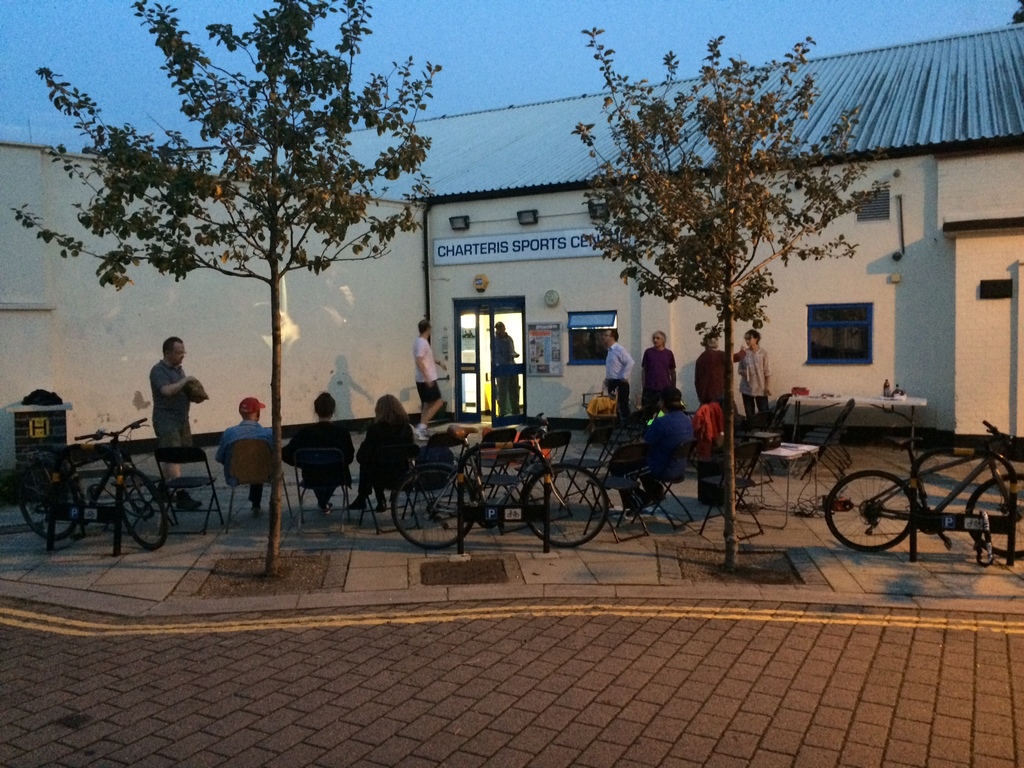 Some pictures below of wine making in NW6 this weekend. Over 100kg were picked from local gardens, which will hopefully be magically transformed in to a wonderful local wine. Look out for a street party in a few months time once the wine is ready.… Pictures from the big dig at Queens Park Allotment 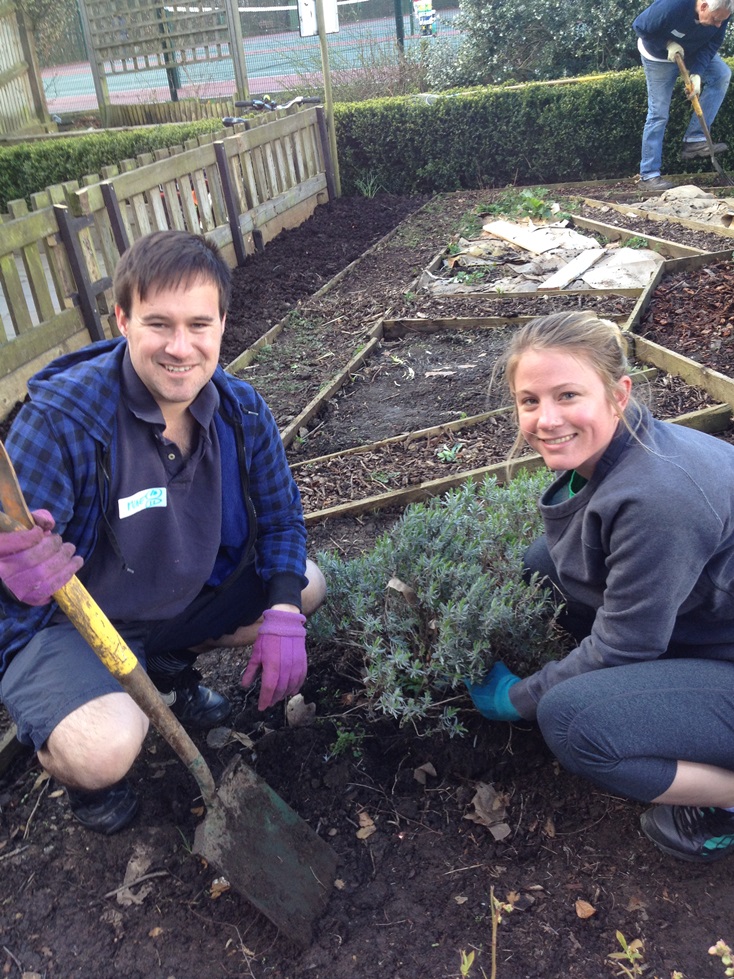 Community Supported Agriculture Network Uk is ready to take off...

The CSA Network UK is running a crowd funding campaign right now to help with setting up the network and tools for CSAs.

The new Network will help us connect with other CSA projects, hold events to share our knowledge and experiences, promote what we do and work with government and policy makers to recognise the benefits of CSA.

I had a few conversations last week with people surprised to find out that chickweed is edible. Familiar to gardeners as a ubiquitous weed, up at Kilburn tube station where Transition Kensal to Kilburn has mini-allotment, our beds are full of them.

Michael Stuart, who is our resident urban foraging expert at the tube garden (he knows more than many people I know, anyway) told me a while ago that it's edible. Since then, we started referring to our weeding of chickweed as "harvesting",…

Hello again... I promised to post some pictures of the habitat panel I made recently. Firstly a picture of what inspired me - a very simple, colourful panel I saw recently at the Ecobuild exhibition at the Excel centre.

Moss (or 101 Ways to Procrastinate while in the Garden)

I know Spring is a bad time for my long forgotten winter blogpost and pics. But I'll be brief.

If there's one type of plant (Angiosperms vs Bryophytes? I'll leave someone better informed to fight it out) that looks amazing in the depths of winter, it's moss. I know very little about them, but I love them at this time of year. They seem so vibrant and bursting with life at a time when everything else has gone a bit quiet and underground. So I have a bit of respect for them. For the kid…

I'm usually more of a traditional female crafter & grafter, although it's mostly my food based skills that have seen a bit more action recently. 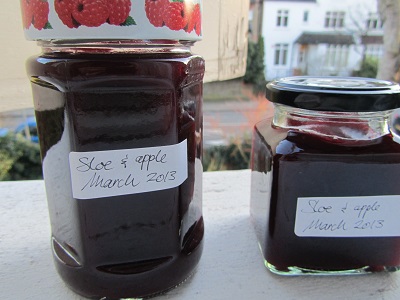 This was firstly in the form of some sloe & apple jam - both frozen after last autumn's harvest due to lack of time. Gorgeous colour, as expected, and similar to damson jam. I couldn't wait to taste it. But it had a strange dry, slightly grainy texture like smooth peanut butter, created or activated by…

Hollyhocks of Arnold Circus in Spitafileds

Have your say on how to improve your council services…join over 1500 Brent residents who are already panel members. Sign up here today.